In coming to the truth of the Bible, we are guided primarily by three things. First, we understand that there is a single economy of God to be seen throughout the Bible. This economy centers on God’s dispensing Himself through His Trinity into His elect. In the Old Testament this economy is seen in many types, shadows, and figures. In the New Testament this economy is presented in the clear words of the apostles. While based on the merits of Christ’s person and on His work in accomplishing our redemption judicially, God’s New Testament economy has the fuller goal of saving man organically, that is, by and with the eternal life of the Triune God. By this life God’s elect are genuinely begotten of God, transformed, and finally glorified. The consummation of this economy is the union of God and man for eternity in the New Jerusalem. Second, the centrality of God’s economy in our understanding of the Bible is based upon the assumption that God can be known and experienced subjectively, not just worshipped and appreciated objectively. God does not intend to remain aloof from mankind in general nor from each of His believers in particular; rather, as evidenced by His incarnation and by His coming as the Spirit, He desires to be intimately and personally related to His elect. The long history of Christian spirituality, though sometimes troubled by excesses, is fundamentally correct in its desire to know and experience God. Finally, we believe that the divine message of the Bible may transcend the intention of its human writers. Holding to the long-standing hermeneutical tradition of the Christian church, we accept the allegorical method for understanding the Bible, particularly its Old Testament, as a valid principle of interpretation. 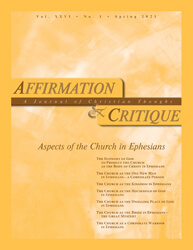 We recognize that some of our readers may wish to engage in a constructive dialogue in response to our affirmation and critique. We invite, therefore, reasonable, article length responses to our presentations. Learn More...

For questions or more information please contact us at: